The Daily Life of an Astronaut

What does the everyday life of an astronaut consist of?

The everyday life of an astronaut is highly complex, difficult and stressful. They have to live in a high tech environment that is completely isolated from the deadly vacuum of space. Fans have to run 24/7 to move around the air, as there is no natural air convection in microgravity conditions.

Sleeping in microgravity can be challenging! In the weightless environment of the ISS, astronauts cannot "lie down" to sleep: there is no real "up" or "down."

Astronauts go to bed in their "sleep stations", personal sleep compartments the size of a telephone booth, which have: 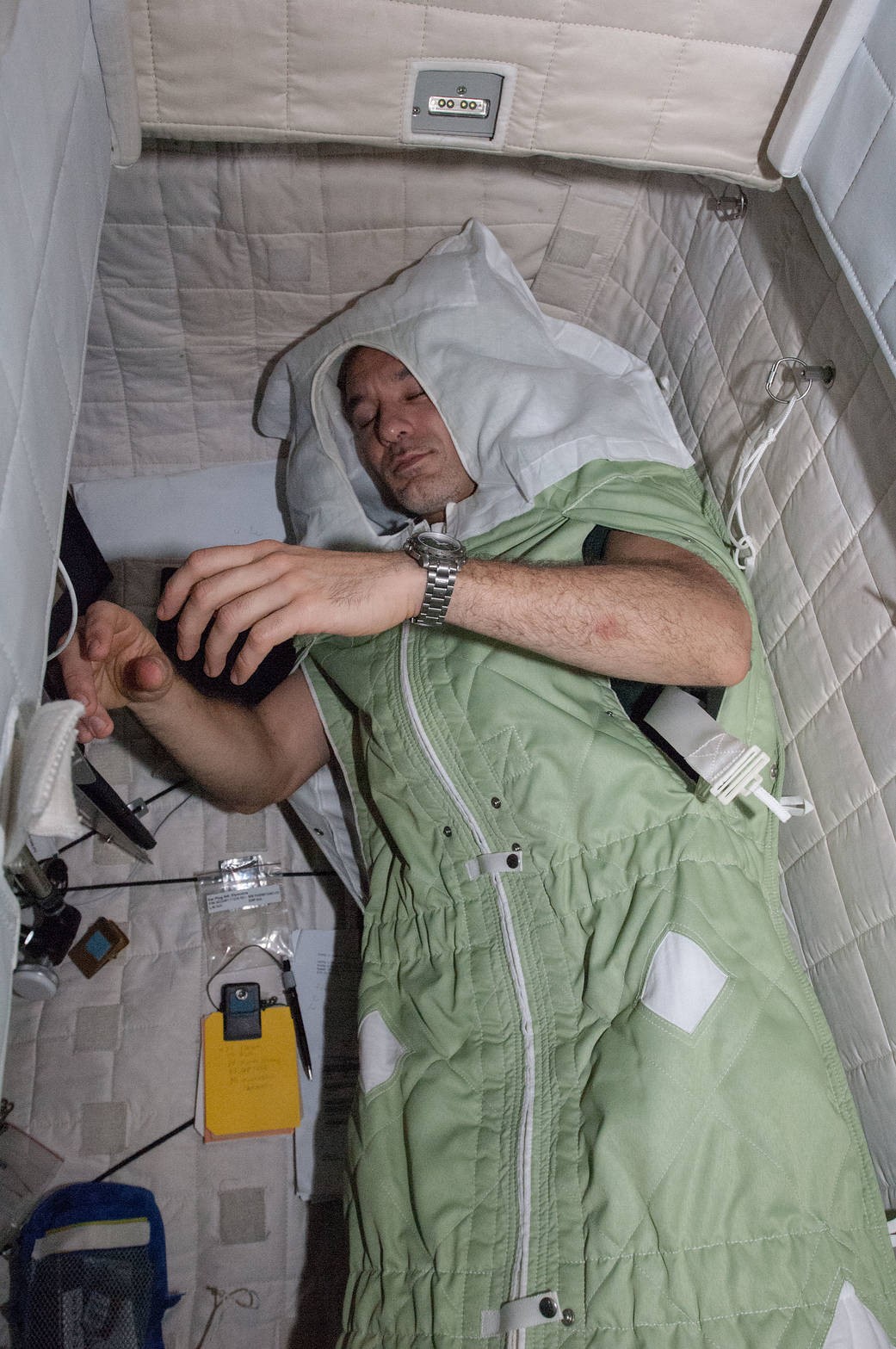 Crew members who want to sleep outside the sleep compartments can secure their sleeping bag to the floor, the ceiling or the wall. 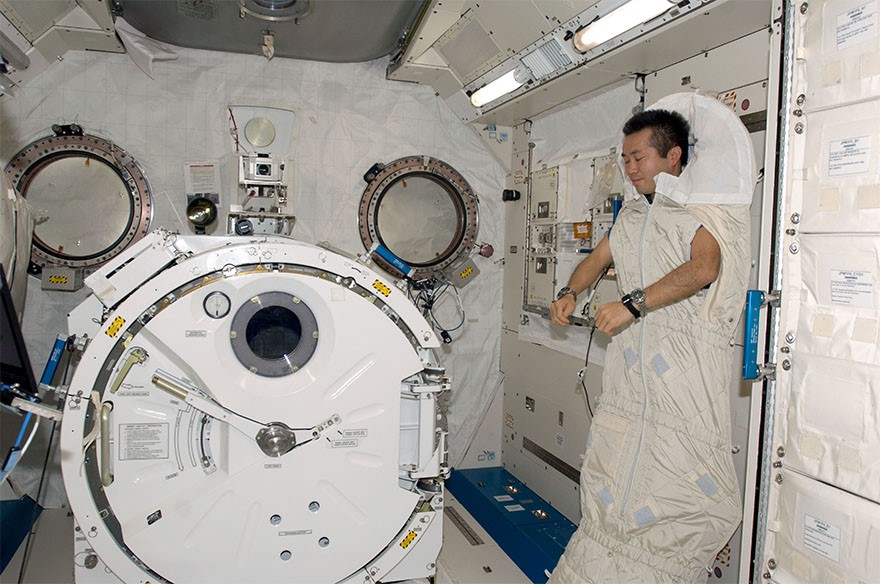 While orbiting the Earth, astronauts witness 16 sunrises and sunsets every 24 hours. Although seeing a sunrise every 90 minutes may seem like an incredible experience, it can also make it difficult for astronauts to maintain a regular sleep pattern. In addition, the noise level on the ISS creates poor conditions for getting a good night's rest. So astronauts generally use earplugs and a sleep mask to block out the noise and light.

The food astronauts eat onboard the ISS must be engineered for consumption in a zero gravity environment. As such, the food must be light, well packaged, fast to serve and require minimal cleaning up and leave little waste behind. Food that tend to leave crumbs are not suited for space, which is why astronauts like to eat tortillas, rather than crispy rolls in space!

Thermo-stabilized food has been heat-treated, while irradiated food has been subjected to ionizing radiation to destroy certain microorganisms. A lot of other type of food is freeze-dried and water needs to be added before consuming. No matter the way of conservation, the goal is to preserve the food and make life easier for the astronauts that will eat it.

Fresh food can be delivered periodically to the Station by cargo vessel. Ground crews sometimes include a few fresh fruits and vegetables—a real luxury!

Carbonated drinks have been tested in space, but are not favored due to changes in belching caused by microgravity; without gravity to separate the liquid and gas in the stomach, burping results in a kind of vomiting called "wet burping”. Beer has also been developed that counteracts the reduction of taste and smell reception in space and reduces the possibility of wet burping in microgravity. Barley harvested from crops grown for several generations in space has also been brought back to Earth to produce beer. The study did demonstrate that ingredients grown in space are safe for consumption. 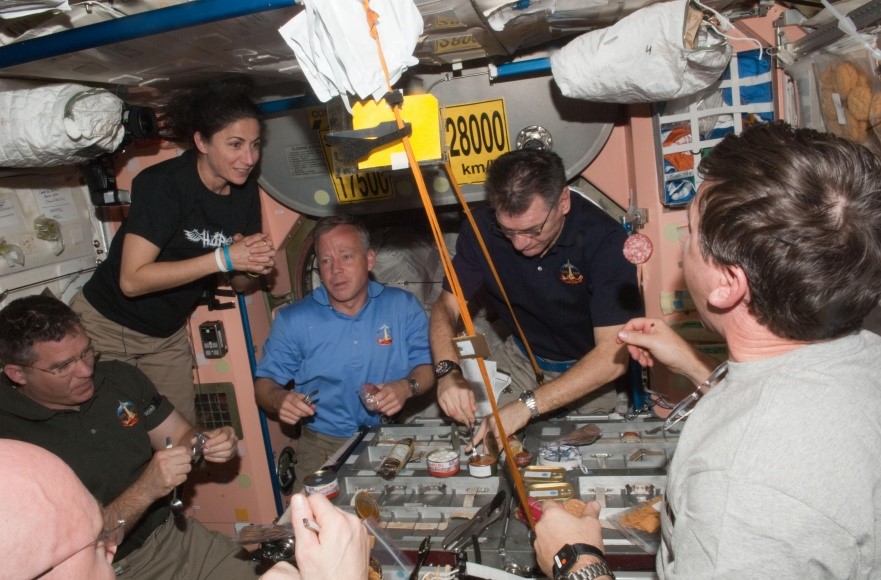 The Crews of STS-133 and the ISS eat a meal together in the Unity node (Source: NASA)

Everyone knows that it's important to exercise to stay in shape, on Earth, that is. But when you're in orbit, exercise is absolutely vital!

Physical activity is the most effective way to counteract the adverse effects of weightlessness on the human body. Exercise is therefore a crucial part of the daily routine on board the ISS. Over the course of a long-duration mission, astronauts must exercise approximately two hours per day! Exercise equipment includes a treadmill, stationary bikes and a resistance based exercise machine that uses vacuum cylinders. 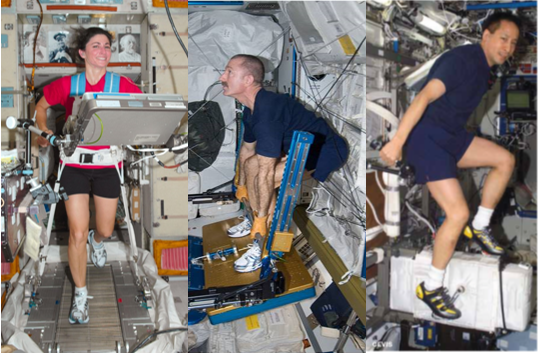 The physical consequences of a prolonged journey in microgravity are similar to those caused by osteoporosis, which affects elderly people. However, these consequences aren't as serious because astronauts' bone density gradually returns to normal after they return to Earth.

This is why scientists use astronauts as subjects in their scientific experiments. This research allows them to gain a better understanding of the effects of weightlessness and how to reduce them, for the purpose of future long-duration space missions but also for people with various health problems on Earth.

Water supplies on the ISS are very limited, which makes water a very precious resource. Water does not "flow" in microgravity: it is therefore impossible to take a shower, wash your hands or go to the bathroom in the same way as on Earth. Performing these tasks requires resourcefulness and ingenuity! As a result, there is no washing machine onboard the ISS. The astronauts wear their clothes until they are too dirty and then discard them in a re-supply ship, which burns in the atmosphere on re-entry.

Keeping a good personal hygiene is difficult on the ISS because there is no sink nor shower. Astronauts use wet towels to clean their body and no-rinse shampoo to wash their hair.

"Each astronaut has personal goals as part of their career. One of mine has been education and public awareness of what we are doing in space exploration." Chris Hadfield (ex-commander of the ISS)

Canadian astronaut Chris Hadfield helped pioneer the use of the Web to inform, educate and raise public awareness in Canada and around the world about space exploration and daily life in space. During his last mission he was an active contributor on social media, including Facebook, Twitter, Tumblr, Reddit and SoundCloud, where he shared content and answered questions openly to the public. His videos, produced by the Canadian Space Agency (CSA), were viewed by millions of people.

Potential Improvements: anything that could help astronauts have a better and more natural sleep in space.

Potential Improvements: new products for astronauts to be consumed in space or marketing of space food on earth, or space-grown food (e.g. the beer from space grown barley).

A polar watch (already a bit outdated) is available for controlling the heart rate during exercise. A VO2 max measurement device can be used. A non-invasive digital palpation of superficial skeletal muscles will be available soon.
Potential Improvements: new, innovative exercise equipment that could be tried out by our Astronautin. An up-to-date watch for heart rate measurement, a blood analysis device for e.g. lactate measurements is not available. This should be a non-invasive device measuring blood parameters through the skin. The development of a special exercise program for the ISS crew, which would be conducted by our Astronautin onboard ISS and simultaneously as a special fitness workout in gyms down on earth (train like an astronaut).

Potential Improvements: social media that could be used by our Astronautin while onboard the ISS for educational purposes or social media marketing.

A comprehensive analysis has shown that a large number of microbes exist on the ISS, mostly on the skin of the crew members. These microbes originate from the crew members itself or from the delivered supplies such as food or technical equipment.
Potential Improvements: It has never been investigated in detail how dangerous these microbes are for the astronauts as well as for the technical equipment.